We are experimenting with a wide range of memory technologies adapted from our understanding of Indigenous memory methods. These are specifically designed for contemporary life in a modern literate world. Our environment may be vastly different from that of non-literate cultures, but the brain we are working with is not. We have a great deal to learn about optimising the use of our memories and the value for learning from our indigenous colleagues. A few examples of the work currently being done:

The method of loci (or art of memory or memory palaces) has been known to be the most effective memory method ever devised since Greco-Roman times. TOC Founder, Lynne Kelly’s research has shown that all indigenous cultures also used this method, with many refinements. Without writing, their very survival depended on optimising the use of human memory. Australian Aboriginal songlines, Native American pilgrimage trails, Inca cheques, Pacific islander ceremonial roads are all manifestations of the same method. Creating landscapes of memory is key to the work done by TOC staff with schools and other groups. 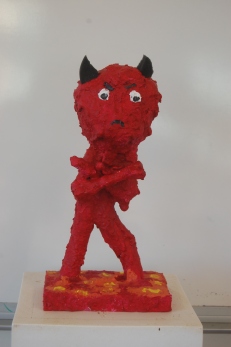 All indigenous cultures use a pantheon of vivid mythological characters to tell the stories which encode a vast store of practical and cultural information. As we do not have cultural ancestors who perform this role in Western society, we are creating them ourselves. We are using the name Rapscallions for the characters that students and others will create to tell the stories and sing the songs of their science, history, grammar, mathematics and every aspect of their learning.

Based on the understanding of portable objects used by Australian and African cultures, we are experimenting with encoding memory boards with information. The most advanced experiments are with simplified versions of the African lukasa used by the Luba ‘men of memory’.

Many people have now created their own lukasa and are encoding them with information. Our youngest is Haku, who is only two years old, but has a lukasa for all the local acacias (wattles).

Klecksography is the art of making images from inkblots. Pioneered by Justinus Kerner but more famously used by psychologist Hermann Rorschach as a tool for studying the subconscious.

The Symmetry of the Klecks cards connects directly with the pattern recognition hardware in our brains, making us see imagined faces and creatures in rough bark textures or rippling streams.

If memory can be enhanced by weaving information into story and mythology, then each card contains a whole world of characters to help keep any knowledge from being forgotten.

Klecks cards designer,  Alice Steel, is both a scientist and an artist. She is currently testing out various designs and working on structuring them into a deck of cards which will eventually be available for purchase.

Artisan, Tom Chippendall is creating replicas of a range of known indigenous memory devices. He has made a lukasa much closer to the originals, as photographed by Lynne Kelly at the Brooklyn Museum. He has also made a copy of an Australian food carrying dish known as a coolamon. We know that the etchings on the underside were used as a memory device because Aboriginal people have told us so.

Tom has also created wooden versions of the carved stone balls of the Scottish Neolithic. We believe these were used as memory devices. Tom’s versions give us the technology, if not the medium. Tom will also be producing mnemonic objects for purchase in the future.

One of Alice’s clay mnemonic balls and TOC-Lukasas (our version of African memory boards) made by her young students to memorise plants, in this case, the acacias. Followed by some of the trial Rapscallions.

We have had sessions looking at methods suitable for making Rapscallions with young children under the guidance of Director Paul Allen in his studio.